JJ is a 15.1hh middle aged palomino American Quarter Horse. He has more health problems than a ward full of geriatric hypochondriacs. He lives in the Clocaenog Forest in Wales, with his adopted daughter H Pony, an elderly Cushingoid Welsh Cob called Storm, and a bothersome young QH stallion called Malory, who needs (and gets) a good kicking.

Mischa is a 5’7″ middle aged redhaired human being, who is permanently knackered and occasionally remembers bygone days where she could afford to buy shoes and books. She 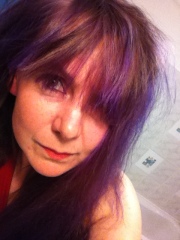 has a couple of research degrees in something gory and obscure, lectured for many years, then gave it all up to work with horses and now lives in a forest in the middle of nowhere in a 400 year old house that contains more bats and mice than actual people. She spends her days reading research papers, analysing equine diets, and getting annoyed by people being wrong on the internet.