Helping a Horse to Help Other Horses to Help People…..

We are nearly at target with just over a week to go!!! 😀 😀 😀 Many thanks to everyone who has donated, and a quick reminder to those who have promised to, haven’t got round to it yet, and of course, all you dozy beans who haven’t been keeping up and haven’t heard what we are up to yet 😀 Here is our fundraising page where you can part with your hard-earned cash (if you have any!) to help the Brooke help people and animals in the Third World:

and of course, if you have already contributed, or are as broke as broke can be, please share the penultimate bit of the running blog which is right down below! ! 😀

Well, in just over a week we will be in London. I say, we. *I* will be in London, I suppose JJ will be stuffing his face on the tracks or in the yard, wondering where on earth I have gone, and I will have to phone home every twenty minutes to make sure he is OK. At any rate, that eight months of planning and trudging round the forest went quickly. OK, maybe running up some of the hills wasn’t very quick, and felt like an eternity. But in general, it is now nearly winter, and my bit of a run in the Park is a week away, and very soon I will be lining up with 16 000 other people in silly trousers who will all smell of fabric conditioner.

The fabric conditioner thing is a real issue for me.  Running, you see, seems to sharpen up my sense of smell.  I can now tell you that the house outside the village is owned by coffee snobs who would clearly die before they made a cup of instant.  The farmhouse next door to them, as well as smelling like…well, farms, uses the dreaded fabric conditioner–I can tell when the washing is on the line, and when they are in the garden, despite a six foot hedge, because I can smell them. I can smell women in cars as they drive past, too, and in town, I can smell them before they come into sight around a corner, or in the next aisle in Tescos.  In short, the world has become a ghastly barrage of loud chemical synthetic smells that drown out normal smells, and it’s vile, like living in a world entirely soundtracked by thumping drum n’ bass.

It is an interesting insight into how horses perceive people, too. JJ finds it pretty offensive when people are smelling of stuff other than normal people smells. Storm likes sniffing you–woe betide you change your shampoo, you can’t get him out of your hair–literally–for days, and we caught him sniffing knickers on the washing line too. 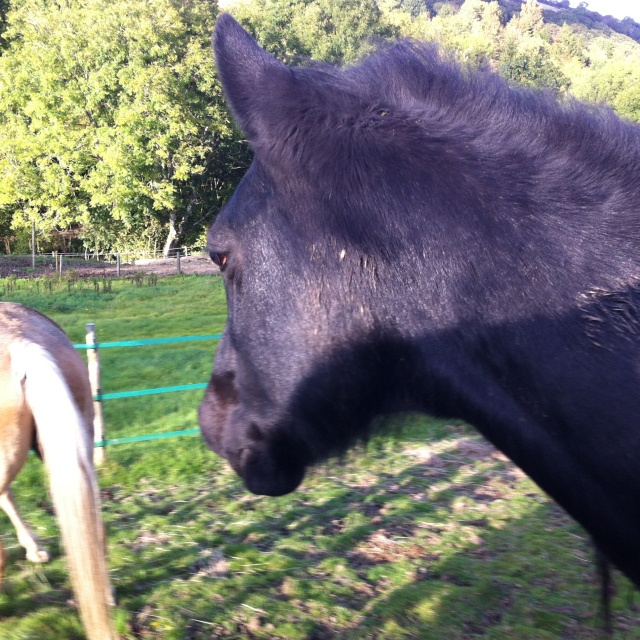 This is Storm, refusing to make eye contact, after the knicker sniffing incident he would rather you didn’t know about.

But JJ literally will snap at blokes for wearing Lynx and he pulls faces at anything particularly hefty on the fabric conditioner front. You will be sniffed, he will recoil, curl his upper lip, and make it VERY clear–often with snorting and nose tossing and pinned ears–that your personal niff is NOT to his liking. I am beginning to understand why, although sadly nearly fifty years of social conditioning is putting me off skidding to a halt and biting anybody who has marinaded themselves in some vile gloop. 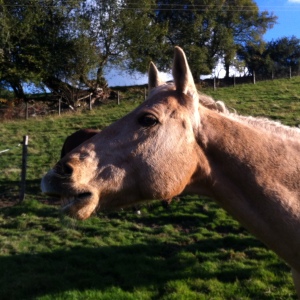 Somebody smells. And they smell bad.

Still, I suspect that a few miles into the run, no amount of fabric conditioner and foul bodyspray is going to matter too much. I live at 900ft in a forest, where the trees outnumber the people about 20 000 to 1, so trying to breathe in London to me is a bit like trying to inhale custard. I am reminded about what Douglas Adams said about New York: that the best way to get a breath of fresh air, was to open a window, and stick your head into a building. I’m not planning to break the two hour barrier, let’s put it like that.

Once upon a time, of course, I would have a Race Plan. How fast to do mile 7, what to listen to in Mile 10, negative splits, how to get to the finish faster than I did last time, and so on. Now I am planning to turn out without a hangover, preferably on time, and maybe to chat to a few folks en route, perhaps take a few pictures, that sort of thing, and having survived long enough to see the FINISH line, to go visit the Brooke tent and perhaps to potter over to Southwark for a swift half in The George. At least I won’t have to stop to haul my running partner out of a bush, or deal with his now ingrained habit of speeding up in certain places. Quarter Horses learn quickly, and once they have learned that a particular stretch of road is good for running along, then you ARE going to run along that bit of road at every opportunity. Even when you are being sat on. Except then, of course, rather than having a human on a bit of string slowing you up, you can actually lurch into a 50mph gallop down the road, because apparently that is perfectly reasonable. I pulled him up eventually and he was extremely annoyed with me for ruining a good hoon.

This has been one useful side effect of taking JJ out training, of course: he is slightly fitter. Now his last bout of abscessing is over and done with, and his meds have kicked in, he is actually pretty sound, and at the moment–for the first time in years–he is back out on the grass tracks and even in the top field. He is moving more, eating far more, looks much better, and is slowly regenerating his back muscles. He is still far from normal, but he is better than he has been in years, and is remarkably cheerful too. He hasn’t tried to kill anybody in ages, at least so long as they don’t smell too bad.

Nowt more boring than horses in a field eating grass. Except one of them is JJ. Eating grass, in a field, as though he were actually NORMAL.

It feels like a long time since Easter time, when JJ had started to improve slowly but even then I wasn’t even sure that he was going to survive, and I decided to do this race. I suppose I would have been running anyway, but probably not whilst thinking about the impact of poverty on animals in the Third World. It has been interesting seeing people’s happy reactions to the banning of working cart donkeys in Tel Aviv. Huge victory for animal rights? Well, not for me. What is going to happen to all the folks who were scratching about making livings recycling junk? I bet they weren’t using donkeys and horses because they preferred them to a pick up truck: chances are they were using them because they can’t afford a truck. They’re probably not recycling junk for a laugh either. So in one glorious blow, we have created a further welfare situation, taking away humans’ meagre livelihoods and making the animals useless. Chances are they will be abandoned or destroyed, and what will happen to the people? Israel already has a 20% poverty rate, higher in some places.

Perhaps it would have been better to instigate something more like the Brooke’s policy, where owners of working animals can have access to education on welfare and management, and veterinary care. I suppose we are up against a very British view of the world though, where animals are companions and pets, and not ‘working’ creatures: I see a lot of Facebook pictures of overloaded donkeys and plenty of bayings of how this should be ‘banned’ and so on, by folks with finely tuned selective compassion. I doubt the little kid working in an Indian brick kiln is having a great time either, and if you think working a donkey is wrong and it should be eating its way to laminitis in a grass field, then remember that the poor kid could probably do with being in school and learning, not working in those conditions, if he is to have a future at all. But he probably has about as much choice as the donkey, and the best we can hope to do is educate him so he can look after that donkey, which can then help the child and his family to earn more and have better lives. I’m afraid being irritated by fabric conditioner is a bit of a First World Issue compared to conditions in a kiln (I’m afraid this doesn’t make the fabric conditioner less irritating or me any less wound up about it, though), but you can find out more about what the Brooke is doing in the brick kilns here.

Interestingly, Monty Roberts has been in India this week looking at the work of the Brooke–he has a long history of working with disadvantaged kids as well as animals, and he is very difficult to keep quiet once he has a bee in his bonnet, so I am delighted that he is taking an interest in the Brooke.

This is what he has to say about the work of the Brooke in India:

So, that’s one place your donations are going, and you can see that it’s clearly making a difference! I’m actually pleased that we’ve been able to do our (very small) bit to help, too, and I’m hugely grateful to all the folks who have also done their bit–through donating or sharing these blogs–to help my horse help other horses to help people. We are now nearly at our target of £350–I think if you include GiftAid we have about £75 to go, though we have a bit promised from various nice human beans we know. If you have any spare pennies of course, JJ and I will be delighted to relieve you of them at:

And of course, if you happen to be about in London on the 12th Oct, do come along to one of the Royal Parks and look out for me. I’ll be the one plodding along like an old bag with pink hair, donkey ears, and an orange shirt, so I think I should be reasonably recognisable even without the horse. And, if you are daft enough to have bathed in Lynx and washed your hair in fabric conditioner, I’ll certainly spot you a mile away. 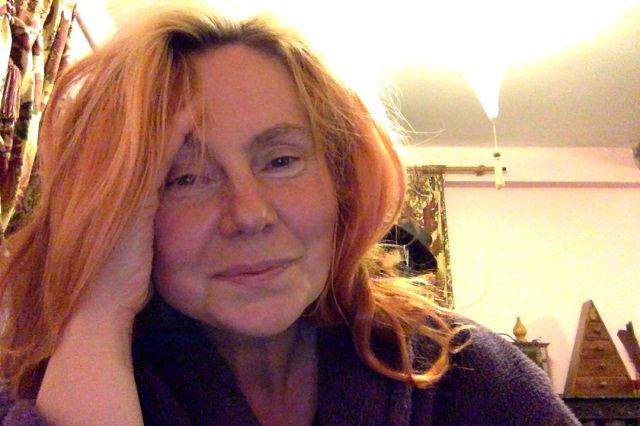 Of course, this might be the last time you see me alive……