We are not going to win this one. Living with a horse that can’t eat much if any grass, is allergic to almost all known horsefood, and who has two serious and debilitating metabolic conditions, and is currently nearly 100kg underweight with no possibility of ever getting any weight, or any muscle, back on him, of course, is living to fight a losing battle. We are not going to win, and every day that passes makes it less likely that JJ will ever have anything that passes for a normal horse’s life. Still, he is doing OK and we are not going to give up yet. And that is what this blog is about.

JJ is a 15.1hh American Quarter Horse gelding.  He was foaled in 1997 and came to live with us when he was 8. We had been looking for a sane middle-aged cob but I bought him, not because he was in any way suitable, but because he was desperately clever and because I knew if I didn’t buy him, I’d probably think about him every day for the rest of my life. Later on we learned that even his breeder had called him a problem horse that had cribbed from birth, and one of his early Western trainers remembered him as difficult, fizzy, and opinionated. His then owner reckoned he was easy going, steady, and a nice friendly horse–which to be fair he is, if he likes you, and if he is feeling well. My first impression of him though was that he was clearly not going to be the easiest and most co-operative creature on God’s earth.  I suspected I’d bitten off more than I could chew, but apart from the fact that is my normal modus operandi, I reckoned I would think of something. And I have, though not exactly in the way I’d hoped. Because what I actually had to deal with, three days into horse ownership, was the realisation that there was something seriously wrong. 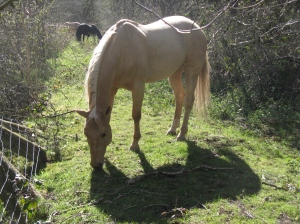 The eight years since have been a long process of finding out exactly what, from low-grade laminitis, to suspected PSSM, through a period of stomach ulcers and extreme behavioural issues to a severe allergy syndrome, and finally, to a diagnosis of Cushings that to my mind, should have been made years ago.  It’s a journey that has seen us do some pretty extreme things. Buying next door’s garden, flattening it, and making a surfaced turnout pen so we could have grass free outdoor living, as well as 24/7 surveillance. Disowning several friends, for suggesting that JJ’s less desirable behaviour could be cured by a good thrashing. Being disowned by several friends, when JJ tried to kill them. Realising exactly what other friends were made of, when even though some of them were petrified, they still helped us out. Rohan abandoned a career in photography and trained as an Equine Podiatrist. I hung up my gown, exited academia, trained as an equine massage therapist, ended up as a feed analyst (and I still can’t trot a 20m circle). The gown, actually, slightly dusty, still hangs in my study and still, faintly, smells of perfume from girlier days (nowadays I, on the other hand, smell of horse feet, horse wee, and Hibiscrub). We reassessed everything we thought about horse owning, training, veterinary medicine, and even ourselves; destituted ourselves, did without, and finally, we moved to a remote and very derelict farmhouse in the Clocaenog Forest, more, of course, for the horse’s benefit than ours. We spend more on hay per month than food, and, of course, managed to pick up an extra three neds en route to where we are now (not including the pigeon, the two parrots, two budgies, four ducks, ten chickens, and an uncertain number of cats). Currently I am drying out a set of hoofboots on the Aga and the entire house smells of singed rubber and cooked thrush. Nobody has noticed. 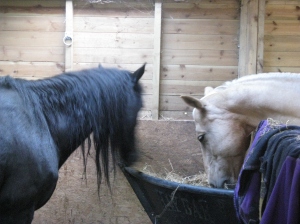 We are, in short, sad obsessive geeks who don’t know when to give up, and if you are already thinking ‘you’d have to have something wrong in your head to do all that for a horse’ then here is not the place for you. Of course, you might not be entirely wrong, either, but that’s not the point. The fact is, when you’re the only thing between a horse and a bullet, you bloody well carry on. I don’t think we will ever fix him, but we can keep him comfortable, and even though it’s not exactly been easy, emotionally or financially, that’s the price of an education. I would buy him again tomorrow, if I could.